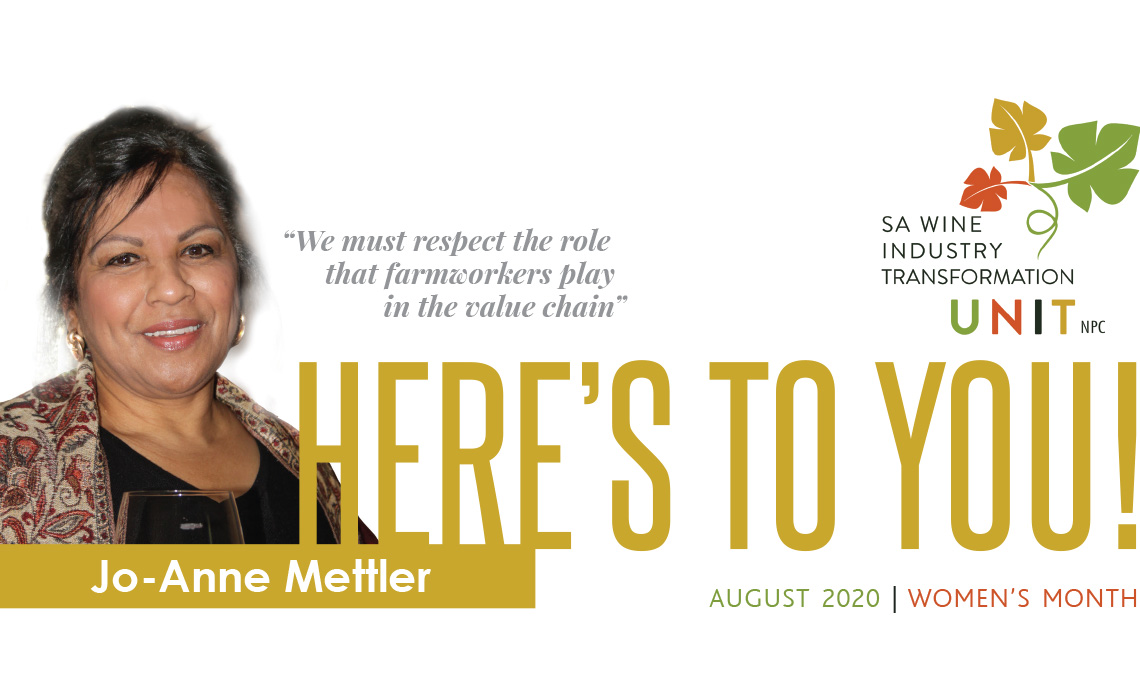 Jo-Anne Mettler exudes a charm, elegance and eloquence that is refl ective of her accomplished career, despite being forced to overcome challenges with grace.

Born in Cape Town, her family relocated to Zambia when Jo-Anne was just three, the eldest of four siblings. “It was shortly after Zambia’s independence and my Dad took advantage of a career opportunity and set the family into a self-imposed exile,” says Jo-Anne.

Reflecting on her early life in Zambia, Jo-Anne is grateful that her Dad took that very bold decision affording the family the right not to be deemed second-class citizens in the land of their birth.

“I was raised in a wonderfully cosmopolitan environment, where I had friends of every colour and nationality. My best friend was a Polish neighbour, Eva, whom I taught to speak English. She is still a friend and a lecturer at Cambridge University. I didn’t do too badly,” she says with
a broad, dimpled smile.

Even Afrikaners, who would not give the family the time of day back in South Africa, became fi rm friends. Whilst learning English and French at school, her battles with Afrikaans was just beginning. “My parents both spoke Afrikaans and my Dad was a worshipper in the Dutch Reformed Church, which also had a presence in Zambia. So, I had to do my catechism in Afrikaans from an English Bible.”

Her political consciousness grew with the family’s frequent interactions with ANC cadres in exile in Lusaka.

On completion of her A-Levels, young Jo-Anne opted to study at Rhodes University in Grahamstown, but the NGK dominee whispered in her father’s ear that sending her to the bastion of English academia was probably not the best idea. So instead she returned to Cape Town and enrolled for a degree in social work at the University of Western Cape. “Here however, the students were all Brown and the lecturers mostly white, and Afrikaans speaking. I remember asking a question in class and being told that I must go back to America by the Afrikaner lecturer,” she says frowning.

Whilst on a visit to Cape Town her father reasoned that if she wanted to make a difference in the lives of those she sought to uplift, that it would be most appropriate to do it in their mother tongue. A determined Jo-Anne persevered and armed with a Tweetalige Woordeboek and her textbooks, she soldiered on.

“Those were very politically charged days at UWC and I joined in the student protests, simply for the fact that apartheid went against my moral compass.”

It was whilst at UWC that Jo-Anne was interviewed for a bursary at KWV and was one of four students successful in landing the coveted bursary.

“Unfortunately, my Dad passed at the age of 50 whilst I was at University and the State confi scated his life savings, forcing my young Mom to fend for the family single-handedly. The bursary could not have come at a better time,” she says.

As was tradition at KWV, recipients of bursaries were hosted at an annual soiree with top management at the company’s stately headquarters in Paarl. “I remember entering those hallowed portals as a young girl and being taken by the fi ne woodwork, the art and décor, coupled with the
crystal glass and china and immediately fell in love with the surrounds. I love the fi ner things in life,” she smiles.

On completion of her studies, Jo-Anne was offered a position of Public Relations Offi cer at KWV, working in the Coloured Team. Here the Coloured employees were not allowed to use the cafeteria, and dare not use the tennis courts or pool, which was only opened to employeesof colour in 2002.

“I remember there was always a ‘ons en julle’ corporate culture and the Afrikaners even took umbrage if some of us became friends with our white colleagues. When I announced my intention to be married, an Afrikaner colleague asked how many children I have as it is Coloured culture to have children prior to marriage.”

It was corporate policy at KWV that the Public Relations staff were all to be single, so that they were able to travel on wine shows. So, her career in wine ended abruptly after five years.

She then sought employment at Truworths, successfully opening their Wellington store in 1990. She rose steadily through the ranks eventually to be promoted to the Adderley Street fl agship store. However, a criminal incident on a train back to her home in Wellington brought her career infashion to a head.

She returned to her love for the wine industry, being re-employed at KWV as cellar tour manager, where her love for the educational aspects of the industry took root. This led to a natural career progression into the Cape Wine Academy where she took charge of their Senior Kelderwerkers Programme and their Wine Ambassadors Course.

“I was a part of the initial fact-fi nding mission to Beaune and Paris and our recommendations led to the implementation of a programme which I am proud is still running today,” she recalls. The bi-lateral programme enables cellar personnel to experience a harvest in France and fast-track their winemaking knowledge and promotion potential despite not necessarily having formal viticulture and oenology training. “I consider the coming to fruition of this programme as one of my wine industry career highlights.”

From here she was to move to L’Ormarins Wine Estate and the Anthonij Rupert Wine range. Here she took charge of the estate, which was neglected after the unfortunate accident that claimed the life of Anthonij Rupert, putting her efforts towards re-establishing it as a leader in the wine and hospitality industry.

Whilst here she served two terms on the Annual SAA Wine Selection Panel and one term on the Diners Club Young Winemakers of the Year panel, serving alongside national and global wine afi cionados.

An illustrious career spanning 18 years with the Rupert Family, during which time she was thrilled to have met and hosted royalty and superstars at the estate, came to a close at the end of 2019, bowing out gracefully from a career in the wine industry spanning more than 30 years.

Looking back at her life’s journey, she says that there is much more work to be done. “We have to make much more effort to respect the role that the farmworkers play in the value chain. They are the backbone of the industry and play an equal, if not more vital, role as winemakers and
vintners.

“The access to the industry by women of colour needs to be addressed, because diversity is not a nice-to-have, it is a necessity that brings rewards for everyone involved. The narrative that many of us had to contend with is that if you are a woman of colour and successful, you’re labelled opportunistic, whilst the younger white colleagues are hailed as being ambitious. This must change. We must persevere,” she concludes, adding that she still has much work to do in working on the transformation agenda that is so critical right now. 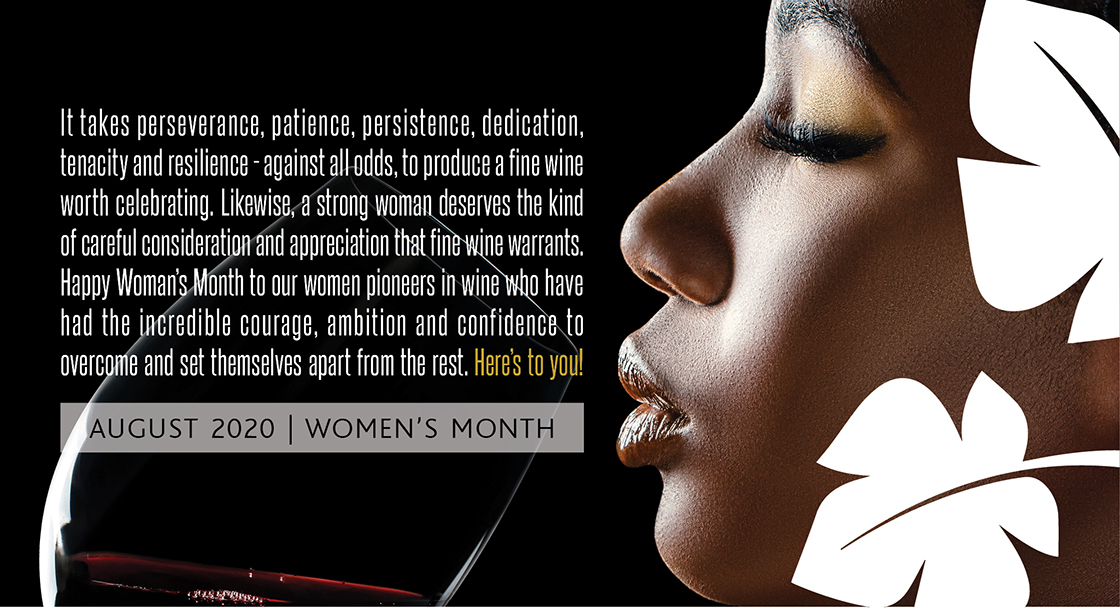