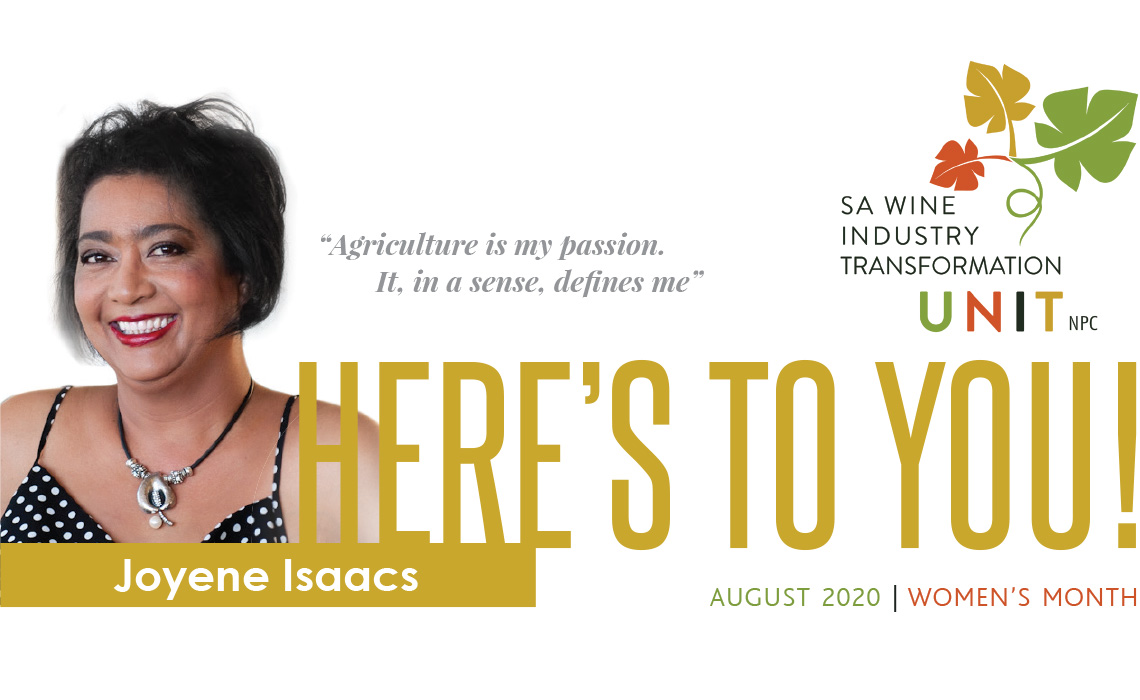 Looking back on her almost two-decade role at the helm of agriculture in the province, in which time she had the singular honour of consistently receiving unqualifi ed audits, Isaacs says, “I just did my job. If everyone just did their jobs, and did them properly, our country would be much better off.”

Growing up in the small rural village of Jamestown, on the outskirts of Stellenbosch, she spent many hours attending to agricultural chores on her grandparents’ farm. Completing her high schooling at Lückhoff Senior Secondary in Stellenbosch, Isaacs applied to study Microbiology at Stellenbosch University and despite her excellent matriculation results, due to apartheid legislation, she was denied study.This did not deter the young Isaacs, who opted to study a Bachelor of Science in Plant Pathology and Plant Protection at the University of Western Cape. With a bursary from the then Coloured Affairs, she graduated with a Bachelor of Science Honours degree, majoring in Plant Pathology. Her first formal employment was to be at the Kirstenbosch Botanical Institute and then at Unifruco Research Services. “The turning point of my career came with an opportunity to work with resource-limited farmers in KwaZulu-Natal in 1991.” Here she worked through the University of Zululand’s Centre for Agricultural Research and Development. “It was during this time that I realised my true passion for agriculture and development.”

After two years in the post, Isaacs was offered an opportunity to return home and to her alma mater to work with grassroots agricultural projects at an NGO housed at the University of Western Cape. Following a three-year stint in the role, she joined the Agricultural Research Council, again working with resource-limited farmers.

Her career at the Western Cape Department of Agriculture began in 2002 where she was fully able to explore her passion for human capital development, empowerment and upliftment as well as policy interpretation and implementation. “I was thrilled at the opportunity as the Department is involved in a number of initiatives that are geared towards ensuring sustainability of the agricultural sector.”

Rising through the ranks rapidly, her fi rst role was Director of Farmer Settlement and Farmer Support and Development. Here she increased the budget 900% from R7 million to R70 million over four years and the staff capacity from 7 to 180. In 2005, she was appointed Acting Head of Department and subsequently Head of Department managing close on 1000 employees, 100 interns and 400 students; a role she was to excel in until her retirement in March 2020.

It was during this tenure that she established the Wine Industry Transformation Unit, which she served as Chairperson until her retirement. Under Isaacs’ leadership, the Department pursued the commodity approach, a partnership arrangement with Black farmers and the private sector and has supported scores of projects in wine grapes, fruit, table greens, grains, vegetables, seeds, animals and aquaculture.

Acutely aware of the wellbeing of the farmworker, Isaacs implemented the Farmworker Development Programme. “Farmworkers are often seen in a negative light and this perception is exacerbated by some urbanites who consider themselves superior. It was therefore time to tell the farmworker story in all its complex and delightful facets and to share the diversity, tenacity and inventiveness of the farmworkers and producers,” says Isaacs.

To bolster this campaign and to celebrate excellence in the sector, she implemented the Cape Farmworker of the Year competition, ensuring widespread participation from the 16 regions across the province from a diverse range of farming enterprises.

“Human capital development is also a value chain – a human value chain – and within the agricultural sector’s context, the need to orientate children from an early age to the noble professions available starts at primary school level. Without the investment in our youth, the sector cannot be sustained long-term, and the ultimate delivery of human capital development is without a doubt a skilled, professional and committed person working in the agricultural sector,” says Isaacs.

To give expression to this ideal, Isaacs implemented the Agricultural Partnership for Rural Youth Development focusing on farmworker children especially in identifi ed areas of Eden, Drakenstein, Overstrand and Witzenburg. “The poor results in maths and science, or absence of these subjects remain challenging. So we implemented the re-writing of these subjects with tuition provided for the interns.”

“Agriculture is the backbone of the rural economy. Without a vibrant agricultural sector, there is no guarantee of food security,” she adds.

While overhauling the landscape externally, Isaacs was managing her equity agenda within her own department and transformed the majority male staff complement working towards at least 50% female employees and also accommodated persons with disabilities within its ranks.

“By no means was this an endeavour to be tackled alone. And most of the success stories with the Department showcase the different roles and responsibilities, different organisations and individuals took on to realise the success we all achieved. Again, it proves that doing things, managing problems, challenges, technical barriers and so on together, we can achieve better results.”

“Agriculture is my passion. It, in a sense, defi nes me.” From a small rural town, to the Head of Agriculture in the Province, Isaacs has used the opportunities afforded her to explore and showcase the many facets of agriculture. Looking back at her almost four-decade long tenure in agriculture, Isaacs says, “I have found two wonderful quotes to sum up myself and agriculture.”

“You only have control over three things in your life – the thoughts you think, the images you visualise and the actions you take. How you use these three things determines everything you experience,” said Jack Canfi eld.

“Research shows that a high IQ, qualifi cations and work experience are not essential for success. The single most important ingredient to success is self-motivation,” said Jack Chen.

“I feel that these two quotes defi ne me and what I do,” she concludes.