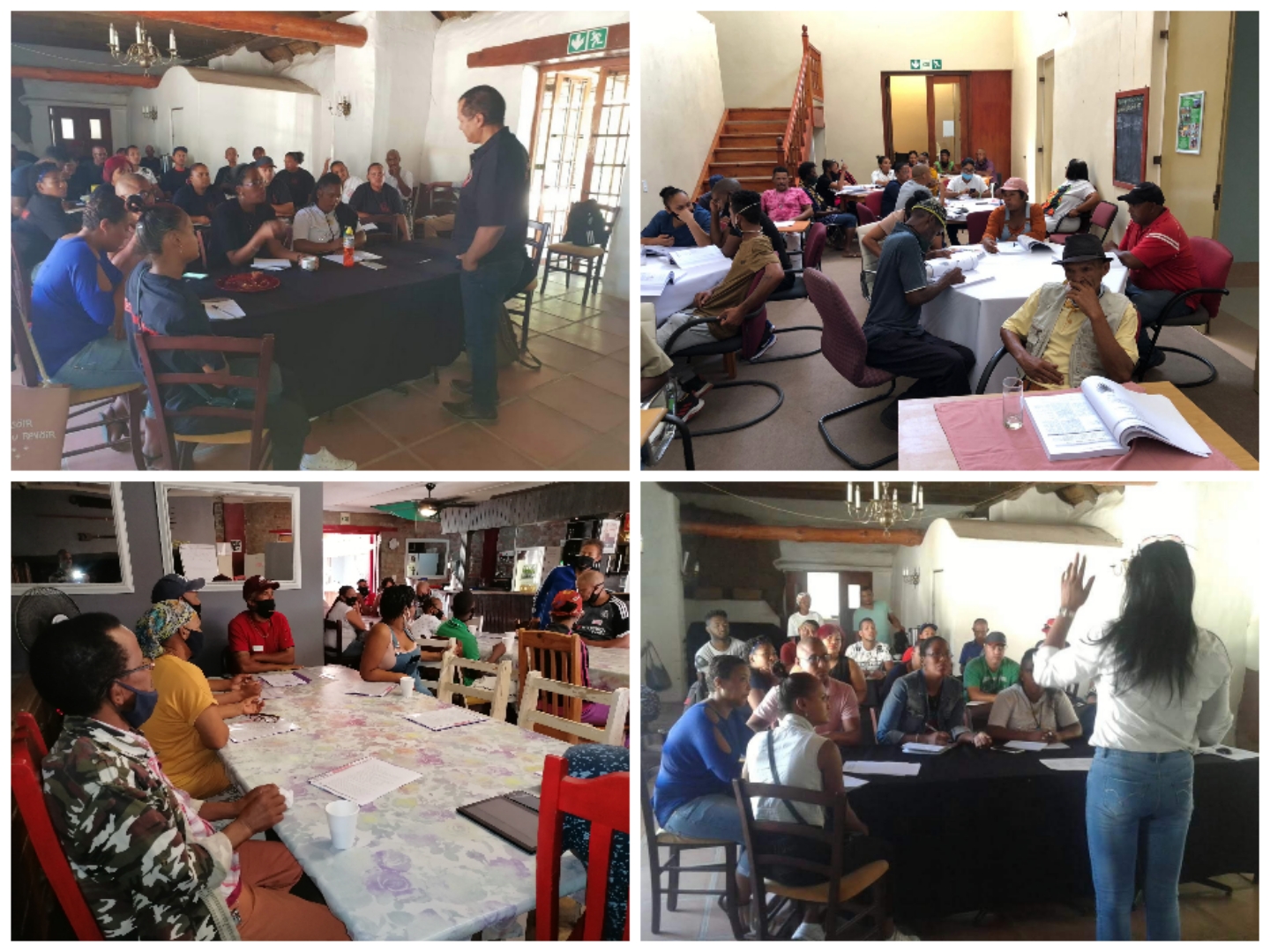 The South African Wine Industry Transformation Unit (SAWITU) continuously engages with stakeholder groups to advance transformation on multiple levels in the wine industry.   One of these levels is training and development.

Although SAWITU has been funding qualifying students to further their education at tertiary institutions, they also identified a need for assistance to primary and secondary production workers.  The organisation therefore collaborates with labour unions to facilitate training and skills development for farm and cellar workers in the wine producing regions.

“SAWITU is committed to working in collaboration with labour unions to uplift and empower workers in the wine industry, “says Wendy Petersen, Operations Manager of SAWITU.  “One of the ways in which we do this, is to fund training programs that is relevant and enables unions to empower workers with knowledge and information”.

“The objective of these training workshops is to ensure workers are aware of their basic human and workers’ rights in order to protect themselves from exploitation by employers”, says Sebastian Julie of SHOWUSA.  “We also found that workers are more confident and positive in the workplace after the training and by sharing the information, they help to create a greater awareness about worker rights in the larger farmworker communities”.

Another union, BAWUSA (BAWSI AGRICULTURAL WORKERS UNION OF SOUTH AFRICA) presented a Worker Capacity Building Program for 150 workers in Ashton, De Doorns and the Boland, Langeberg and Overberg areas.  They also completed the first series on Gender Based Violence and a Leadership Skills Program and will commence with the second series in July.

“With these training programs we aim to raise awareness and propose preventative measures, ideas and strategies through targeted social campaigns to deal with social pathologies on farms and in rural communities”, says Carlo Dietrich of BAWUSA.

The Gender Based Violence program aims to reduce violence against women and children as well as absenteeism from work due to family violence, by creating awareness of the impact of high levels of alcohol consumption.

A further focus is placed on the rights of women in the workplace with regards to sexual intimidation and how this can be addressed through the proper channels.  This is very relevant as the majority of BAWUSA’s training beneficiaries are female.

Training shop stewards greatly assists with the protection of all workers as they are more equipped and knowledgeable about the procedures for dealing with abuse in the workplace.

The labour unions are represented on the Board of SAWITU, by Mr Gafieldien Benjamin from AFRIWU to ensure that the interests of farm and cellar workers are addressed at the highest decision-making level in the organisation.

More about the labour unions.

SHOWUSA was established in 2014, with offices in Johannesburg, Durban and Cape Town.  Their members in the wine industry are predominantly in Montagu, Saron and Porterville.

Their objectives are to

Over and above these objectives, SHOWUSA assisted with food parcels to workers during the initial lockdown period last year and started with back-to-school packs for Grade 1 learners this year.

Some of the greatest challenges the union experiences, are disputes that are taking too long to be resolved due to CCMA budget cuts; new entrants into the industry who violate workers’ rights; subcontractors that are not registered and do not comply with the labour law and access to farms for recruitment.

BAWUSA was established in 2008 and although they work on a national basis, their members are predominantly from the Western Cape.  Members in the wine industry are from Ashton, De Doorns, and the Boland, Witzenberg, Langeberg and Overberg areas.

The union’s main objective is to provide a labour related service to their members which include but are not limited to wage negotiations, representation of workers at the CCMA and other bodies and engagement in terms of conditions of employment.

BAWUSA runs a food parcel scheme as additional support to its members and also provide legal support where needed.

Some of the greatest challenges they experience at the moment are the retrenchments of workers in the wine industry, reduced salaries and deteriorating conditions such as housing for workers.