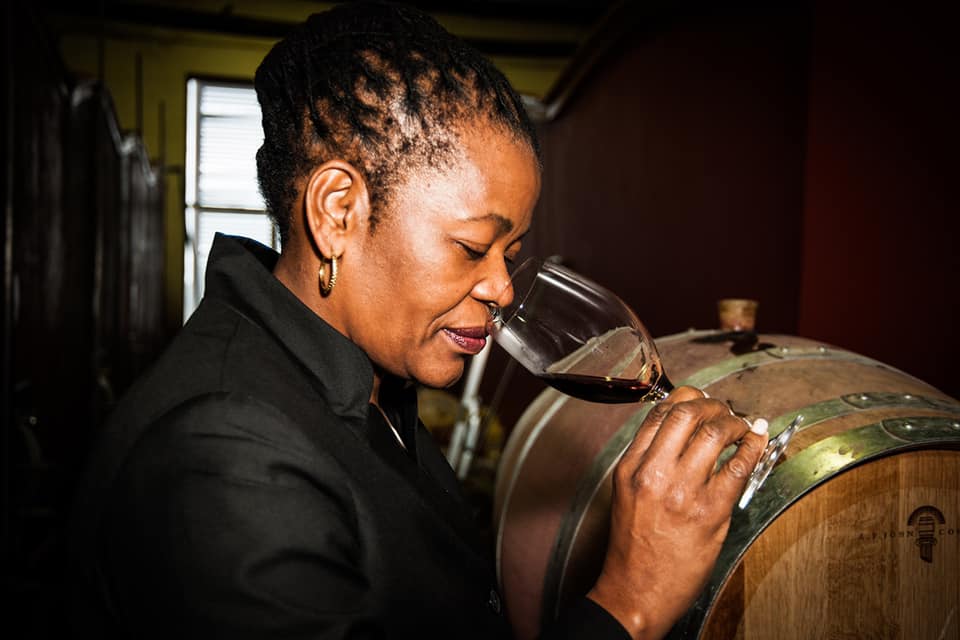 Crossing the bridge into a hopeful future

Rosemary Mosia, founder and CEO of The Bridge of Hope Wines, never imagined that she would own a wine brand one day.  Coming from a financial and accounting career in a parastatal and corporate environment, she systematically crossed a bridge and transitioned into a new industry she gradually got to know and love.

Discovering the world of wine

Rosemary’s discovery of the world of wine can almost relate to peeling an onion. Every engagement was like a new layer being peeled off to bring her closer to the core of her future business venture.

Her first introduction to wine was through an impromptu invitation by friends in 2001 to accompany them to a wine farm in Stellenbosch.  The whole experience was new to her, but she was intrigued by the beauty and ambience of the surroundings and the culture of wine.

Rosemary’s knowledge in wine was further deepened when she did a research project on the South African wine industry as part of her Master’s Degree in Business Leadership.  Being the thorough person that she is, she read every magazine and publication she could find that had information about wine and the wine industry.

A few years later, another layer was peeled when Rosemary was asked by another friend to attend a Wesgro event on her behalf.  This is where she met Nondumiso Pikashe, owner of Ses’fikile Wines.  Nondumiso took Rosemary under her wing and taught her everything she knew about wine and the wine industry.  Rosemary soon gained international experience when she represented Ses’fikile Wines in China as part of the Western Cape Department of Agriculture delegation and also at a trade show, the Vin Italy in Europe.  Unfortunately, the wines never arrived in Italy and the embassy helped her to get another South African brand to present at the show.  Little did she know that once back in the country, her paths would cross with this wine brand again and would be the last layer to be peeled that would bring Rosemary to the final step to establish her own wine company.

From crunching numbers to bottling wine

Rosemary had a long and successful career in auditing, risk management and financial management at Transnet in Johannesburg before she transferred to Cape Town to manage the coastal regions for Transnet Housing in 2001.  Seven years later, the business unit was sold, and Rosemary was given the option to move back to Johannesburg.  By then, her family was settled in Cape Town and with their twin daughters in matric, they chose to stay, and Rosemary joined the new company.

After a year, she founded her first business, a financial services company called Bridgefin, which she could run from home while transitioning to the establishment of The Bridge of Hope Wines, a company where she creates space for her daughters, Moleboheng and Lebohang to add their expertise in law and hospitality and her son, Mojalefa who manages the local sales and marketing of the brand on a full-time basis.   Rosemary believes that her children should grow with the company and involved them from the beginning.

The brand developed with time

The Bridge of Hope Wines is comprised of three collections: The Classic Collection, The Premium Collection and The Reserve Collection.  The business was mainly self-funded, but in later years Rosemary applied for funding from the SA Wine Industry Transformation Unit (SAWITU) to assist with export marketing.  She travelled to various countries to market their wines and increase their exports.

When traveling was restricted due to the pandemic, they started presenting virtual wine tastings to keep some of the momentum they gained prior to lockdown.  Since the restriction on wine sales reduced income for the brand, funding from SAWITU helped cover operational costs, sending of wine samples for virtual tastings and the acquisition of stock to ensure a sustainable supply of product to customers.

The impact of the Covid pandemic had many unanticipated consequences.  The Bridge of Hope Wines could continue to trade with their existing customers through virtual meetings and tastings, but this method was not as efficient to generate new business.  Before lockdown, they used students to assist with local wine tastings, but with the university’s irregular academic programme, this has become a logistical challenge.

Rosemary is hopeful that they can start traveling again soon to build on their international customer base.  The brand currently exports to Belgium, Russia, Malaysia, DRC, Cameroon, Uganda, Ghana and Ivory Coast and they are in discussions with importers in the USA and Singapore.

An industry for all age groups

With her own children’s involvement in the business, Rosemary realised that young people in general were not aware of the various career options that were available to them.

They started an NPO called The Bridgewell which is funded by Rosemary personally as well as The Bridge of Hope Wines.  The NPO started a wine management programme to teach the youth that are not familiar with wine about wine etiquette, thus, how to open, serve, taste and store wine at home.  They also educate the youth about keeping wine in cellars as an investment and the different career options available to them in the wine industry.

The NPO regularly donate to charities like Council of Churches, Gender Based Violence organisations and the Steve Biko organisation.

Rosemary and her children plan to increase their exports to more countries and also increase their local market share in all South African provinces.  They would also like their own wine farm in order to control the production of their wines.

Just as a bridge gives one the opportunity to cross from one place to another, Rosemary and her children crossed from their previous life into the wine industry and plan to keep moving forward towards building a stronger and even more successful family business.