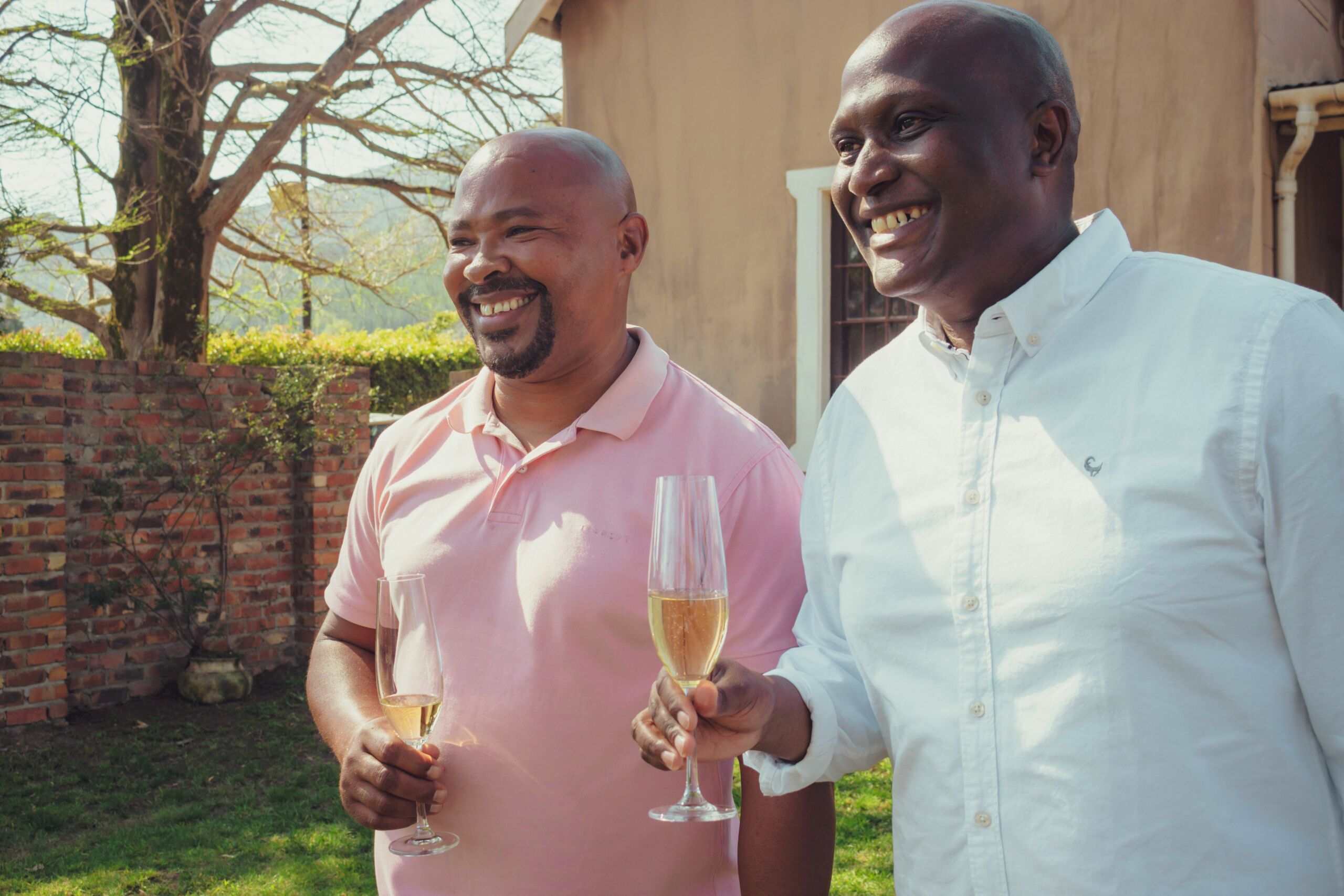 When you meet the owner of Klein Goederust, a boutique wine farm in Franschhoek, you immediately get a sense of someone who loves the land, the vineyards and the produce they create on this quaint estate in one of the most popular tourist destinations in the Western Cape.

Paul Siguqa and his wife Makhosazana, also known as Khosi, are owners of the first 100% black-owned wine farm in Franschhoek.  The couple bought the farm partly because of sentiment, but also as a business opportunity.

Paul grew up on Backberg Wine Estate, not too far from Klein Goederust.  He is the son of a farm laborer who taught him and his sister to reach beyond the farm gates and follow careers that will give them better opportunities in life.  Their mom worked on a farm all her life and she was determined to break the cycle of poverty by teaching her children the value of education.  Paul joined the advertising sales team, working for Media 24 in Cape Town and Gauteng for a number of years before he started his own Communications Company.  “But I always wanted to come back”, says this multi-skilled entrepreneur.

In 2015 he started exploring the possibilities of buying a farm and found this run-down property in the Franchhoek valley.

Klein Goederus is a 10ha farm established in 1905 and Paul and his wife decided to keep the name due to the heritage value it offered, but also to add their own legacy to the history of the farm.  They bought the farm with own funds and invested a significant amount to renovate the property and plant new vineyards.  “We want to compete on an equal footing with similar wine farms”, says Paul.  “Our aim is to produce a 5-star estate with world-class wines” They were fortunate to receive funding from the Western Cape Department of Agriculture to replace their irrigation system and recently received a new tractor to replace the old one they inherited from the previous owners.

To establish a boutique wine estate in these current economic times, with the hovering uncertainty of possible restrictions on wine sales and stricter lockdown levels is not easy, but Paul is determined to make his business a success despite the odds.

The neighbors have been very helpful and Hein Koegelenberg from La Motte Wine Estate just down the road, took up the position as mentor to Paul.  “Hein’s support and sharing of his knowledge and network has been invaluable to me and my team.  We are learning as much as we can about running a wine farm.” Paul also joined Vinpro in 2020 and the SA Wine Industry Transformation (SAWITU) in 2021 as member to increase his network in the organized structures of the wine industry.

Paul’s team predominantly resides in the Franschhoek valley.  His winemaker, Rodney Zimba, grew up with him on Backsberg Wine Estate and the two chefs in the restaurant as well as the waiters and support staff are all locals.

Paul is a man on a mission. “Buying this farm is very significant to us as a family.  We want to change the narrative that children of farm laborers would become the next generation of farm laborers.  We also want to change the narrative that black farmers cannot run successful farming businesses.” The farm will also provide generational wealth to the couple’s son Lunga and daughter Zama.

The Siguqa family bought the farm in 2019 and planted Chenin blanc, Chardonnay, Semilon, Shiraz, Mouverde and Pinot Noir grapes in 2021.  The farm is already producing quality wines from grapes they buy in, and their range currently consist of a Chenin Blanc, Cabernet Sauvignon Merlot blend, Merlot Rosé, Shiraz, Noble late harvest and MCC Brut, which was named after Paul’s mom, Nomaroma, the matriarch of the family.

The bottles carry the family crest, the Southern Ground Hornbill, a bird firmly perched in African beliefs as a symbol of good fortune and protection.

The wines are served in their renovated tasting room and newly established restaurant, which officially opened on Friday, 3 December 2021.  The restaurant serves a buffet lunch consisting of karoo lamb on a spit, barbequed chicken and a vast selection of delicious complimentary dishes and desserts. The two chefs, aunty Linda and chef Granville, offers a fusion of traditional and modern cooking styles to cater for a vast array of palettes.  “Ons bedien net lekker kos hier (we only serve delicious food here)”, says aunty Linda.  The restaurant is open from Wednesday-Sunday from 11am to 5pm.

Their future plans include their own cellar, but as we suspect, this seasoned entrepreneur will soon surprise the world with the unrevealed plans he has up his sleeve.